Flint is an elegy to a stranger prompted by a dream. It is therefore a dream diary, where the stark reality of suicide is addressed against the backdrop of springtime, interspersed with some musings on catharsis and hero-worship in modern culture.

Adriana Díaz Enciso is a Mexican poet, novelist and translator. She has been living in the UK since 1999.

Adriana Díaz Enciso was born in Mexico and has lived in London since 1999. She has published (in Mexico) six books of poetry, four novels and two collections of short stories. She’s the author of many lyrics for Mexican rock band Santa Sabina, and has written for the stage and TV.

Her most recent novel, Ciudad doliente de Dios (Doleful City of God), published in Mexico by Alfaguara and the National Autonomous University of Mexico (UNAM), is inspired in William Blake’s Prophetic Poems. Her latest literary translations include George Eliot’s The Lifted Veil and Walter de la Mare’s Seaton’s Aunt, also for the UNAM.

She has contributed to over 30 literary publications in Mexico and other countries. In the UK she has published in Poetry London, Modern Poetry in Translation, Wormwood, and in an anthology of short stories for Egaeus Press. For several years she was the secretary of the Blake Society, and co-founder of the project to acquire Blake’s cottage in Felpham and turn it into a centre for creation. She’s also been a trustee for Modern Poetry in Translation. She’s currently working on her fifth novel (written in English) and on the translation of a selection of British poet David Harsent’s work.

There are no reviews yet.

Only logged in customers who have purchased this product may leave a review. 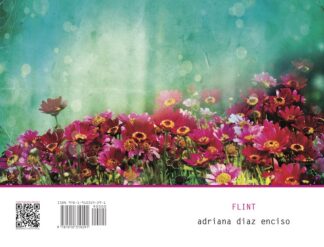 You're viewing: Flint by Adriana Díaz Enciso £10.00
Add to basket